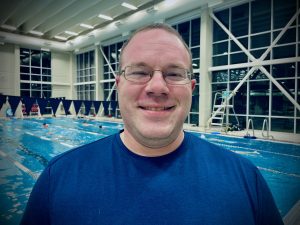 2020- Swim Newton Assistant Coach. Started with Swim Newton as a volunteer for Swim Newton Summer League program where he enjoyed teaching technique to the newest swimmers.

Prior to coaching Swim Newton, Jason coached the Wichita Genesis Summer League. He has also coached numerous school team sports including track and soccer; plus recreation team sports basketball and baseball. Jason competed on the collegiate level on the Benedictine College and Bethel College soccer teams.

Personal
Originally from Wichita, Kan, Jason and his wife Adrienne reside in rural Walton with their three sons Ben, Matthew and Luke. All three boys swim for Swim Newton. Jason also volunteers at his boys’ school and his church. Jason is a former police officer for Newton Police Department and was part of the team that was named 2016 Team of the Year by the Kansas Chapter of the Association of Public Safety Communications Officials. When he is not on the pool deck, Jason enjoys time with his family, constructing LEGO sets.
Wife Adrienne was a club and high school swimmer.

Is Swim Newton right for you? Test our Waters